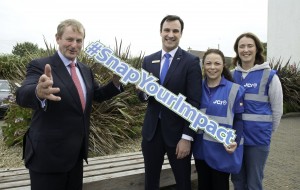 Active Citizenship Week which runs this year from September 1st - 7th will be officially launched today (Monday 1st September) by Taoiseach Enda Kenny in Belmullet, Co. Mayo. The week which is led by Junior Chamber International (JCI) Ireland aims to focus Irish people's minds on the importance of being an active citizen in their daily lives. Eight branches of JCI from around the country are encouraging members of the public to become an active citizen by taking on just one of their "50 ways" challenges which range from donating blood to visiting an elderly neighbour, organising a community clean up or simply donating clothes to a local charity shop. Active Citizenship Week has been an annual event since 2007 among JCI members but this year the entire country are being invited to join in and share their active citizenship actions online by using the hashtag #snapyourimpact Speaking of the week, Derek Reilly, JCI Ireland President said, "Active citizenship is something that concerns everyone and the purpose of this week is to further stimulate the interest of people to become even more involved as active citizens. Being an active citizen means taking responsibility for the way our society is. By actively trying to make positive differences we can create the type of Ireland we want. It is so easy to get consumed by work and social media that we can neglect the positivity that being an active citizen generates. As JCI members we want to lead by example and this week is about us putting ourselves out there in that capacity." Also speaking of the week, Taoiseach Enda Kenny said, "Now, more than ever Active Citizenship is what Ireland needs. There are thousands of people all over the country making a positive difference in their communities every day of the week and Ireland would be a poorer place without them but more of this is needed. Being an active citizen and volunteerism is what binds communities and makes Ireland unique and great. This week is a week of sharing and taking responsibility together for our society and I hope that it carries on much further past this week to become more of a way of life for all those who will get involved in any way." To find out more about Active Citizenship Week log on to www.jciireland.ie/acw where you can also pledge your activity and discover 50 ways which you can become an active citizen and use the hashtag #snapyourimpact on social media