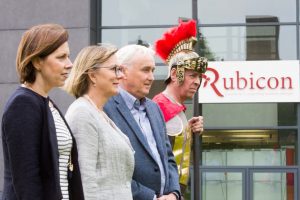 Ireland's leading business incubation hub, The Rubicon Centre is celebrating 10 successful years of powering start-ups today with a special birthday event. While the Rubicon Centre has been part of the Cork ecosystem supporting entrepreneurs since 2006, Cork Institute of Technology has been supporting entrepreneurs in the region since 1998 through its entrepreneurship development programmes. Between 2006 and 2016 Rubicon companies have created 896 jobs in the Cork region with innovative business solutions for both the domestic and international markets. Many of the clients and former clients have now established operations in other countries, including USA, Australia, and the UK. Along the way, these companies have raised over €68.3 million in public and private finance and secured €12 million in Horizon 2020 funding. The Rubicon Centre has a number of support programmes running across the region to support entrepreneurs at different stages of development. The suite of development programmes include New Frontiers (formerly Genesis), Exxcel, PINC and Cumas and have supported 100’s of start-ups. In the last decade, Rubicon companies have included 34 HPSU's (High Potential Start-Up) who took their first steps at the Centre, all of them now trading internationally. Over €1 million has been secured by 20 Rubicon companies through Enterprise Ireland's Competitive Start Fund since its launch, which has allowed them to leverage further investment. Of the successful businesses formed through supports from the Rubicon Centre, 73% are still in operation today, a number that is well above the EU average for start-up success rates. These figures have firmly placed the Rubicon Centre at the forefront of the region's start up community over the past decade. Looking back at the past 10 years, Dr. Orla Flynn, CIT’s Vice President for External Affairs said, "The Rubicon Centre has become such an intrinsic part of CIT life that it’s hard to believe it’s only ten years old! The presence on the CIT campus of close to 50+ incubating companies which interact on a daily basis with CIT staff, students and research centres ensures that entrepreneurship and support for business is truly embedded in CIT’s core mission of providing graduates with a career focus. The Rubicon Centre also makes an enormous contribution to regional economic development both through the companies currently located on-site but also through the large number of alumni companies." Commenting on the event, Paul Healy, Rubicon Centre Manager, said, “It is great to have worked with so many entrepreneurs, many of whom came with just an idea, and today form part of the indigenous employment base of Cork City and County. It has never been enough to have just a good business idea. Entrepreneurs need access to supports and the Rubicon Centre works with the other development agencies in the region including Enterprise Ireland and the four Cork City and County Local Enterprise Offices to ensure entrepreneurs have access to a wide variety of supports including investment, training, mentoring and moral support from like-minded individuals to take their idea to the next level. They can do this in the Rubicon Centre environment where no equity is taken in any of the companies that are supported. We are looking forward to the next ten years where the needs of entrepreneurs will no-doubt change, with different types of start-up ideas, but the characteristics and demands of these start-ups will require the Rubicon Centre to continue delivering solutions to help others join the community of Rubicon Start-ups in Cork”. Guest speaker, Julie Sinnamon, CEO, Enterprise Ireland said, "The Rubicon Centre has played an important and central part in the development of the start-up eco-system in Cork for the past 10 years. The Centre’s location on campus provides an enterprise focus for those studying here and resident entrepreneurs act as valuable role models for others to follow, boosting Cork’s reputation as a great place to start and run a business. It is well known that some 34 of the strongest High Potential Start-up Companies backed by Enterprise Ireland, began their journey at the Rubicon Centre. In the aftermath of the Brexit decision, innovation is more important than ever in responding successfully to challenges facing indigenous companies. We must continue to plug our companies into the power of our research system, so that our start-ups invent new processes and products and adapt to new markets. Enterprise Ireland looks forward to continuing to work with The Rubicon Centre, to foster innovation and develop entrepreneurship in the Cork region, as we help more Irish businesses to start, grow and succeed in export markets, building the next generation of Irish start-up success stories, with global success in diverse markets."