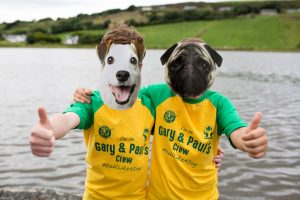 Limited Edition Olympic T-Shirts to Help Skibbereen Rowing Club Produce the Next Olympians Wednesday 17th August; Skibbereen Rowing Club have launched their official O'Donovan Brothers limited edition #Pulllikeadog t-shirts in aid of the club which has produced two of Ireland's top sportspeople and Olympic Silver medalists. Gary and Paul O'Donovan stormed in to the hearts of the nation on Friday last when they claimed Silver in the Men's Lightweight Double Sculls while also creating TV gold with their witty interviews. The limited edition t-shirts which are part sponsored by Skibbereen Credit Union will help towards their goal of extending the old clubhouse, building a proper slip and floating pontoon from which to launch their boats and modernise the facilities for all athletes. The t-shirts which are available online through the Skibbereen Rowing Club website and from Skibbereen Credit Union, The Corner Bar Skibbereen and Minihan's Bar Lisheen will sell for just €15. They are expected to become a collector's item, marking Ireland's first ever Olympic medals for rowing. The club which was founded in 1970 has given rise to 5 Olympic athletes in just 16 years with many more firmly eyeing up their place on the Irish team for Tokyo 2020. Six of the club's athletes will also travel to Rotterdam in the Netherlands in the coming days to compete at the Junior and Senior World Championships and whereas the club also has one athlete competing at the World University Games in Poznan, Poland. Speaking of the launch of the t-shirts, Seanie O'Brien, Captain, Skibbereen Rowing Club said, "We are delighted to launch our official t-shirts which will help the club to invest in our rowers and ensure that we can continue to improve and build for even more future Olympians. It is difficult to believe that this club which does not have much of the basic equipment found in many gyms has produced two of the world's best oarsmen. This is down to the spirit of the club, the unrelenting drive of Dominic Casey and all of our volunteers of course the ambition and commitment of Gary and Paul. Also speaking of his dedication to the rowing club, Donal O'Driscoll, CEO, Skibbereen Credit Union said, "We are delighted to be able to support the rowing club in their endeavours to raise badly needed funds. Looking around the club there is a real sense of pride and achievement but the need for major investment is also sorely visible. The athletes of the club deserve the very best of facilities for what is one of the most physically demanding sports in the world, and although the t-shirts will only provide a small percentage of what is needed overall, I hope that it will be the beginning of major investment in this outstanding club which can compete with and beat the best in the world. The official Gary and Paul O'Donovan t-shirts are limited edition and are expected to sell out ahead of their homecoming on Monday August 29th at 7pm. People can also donate to the club which is a registered charity online at www.skibbereenrowingclub.com