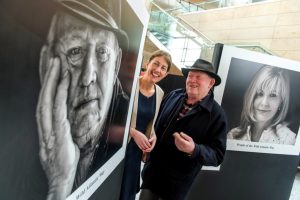 Portrait photographer Shay Hunston will officially unveil his first large-scale Cork exhibition on Friday 3rd March as his project, 'People of the Wild Atlantic Way' will be showcased in Cork airport throughout the month. Dublin photographer Hunston who specialises in portrait, fashion and street photography has taken a break from his European assignments to travel the 2,500km coastline from Cork to Donegal to capture images of Irish people along the route. Hunston began his People of the Wild Atlantic Way project last June, capturing more than 300 images of inspiring faces in West Cork. Twenty of these images will give rise to his first exhibition in Cork which is sponsored by The Celtic Ross Hotel where the images will be housed for auction after March. On completion of his Wild Atlantic Way journey, Hunston will collate the images in to a book with all proceeds going to the RNLI. Speaking of the exhibition, Hunston says, "On beginning my journey, I felt that West Cork was the obvious place to begin and although I was nervous about whether people would sit for me and allow me to capture them as they were, I soon realised that there was no need for any apprehension. As a people, the Irish are the most open in the world and it didn't take long for word to get out that there was a man with a decent camera looking for interesting faces to capture! By the time I finished I had taken over 300 portraits and captured what I feel is an honest look at the kind of people we encounter every day. The project has been a real learning experience for me, one of the best life lessons I have learned; that everyone has a story and everyone likes to tell it in their own way, which I allowed them to do either by describing their perfect day or quoting their favourite poem. These images capture people as they are, minus a beauty team, heavy lighting and photoshop which makes it all the more appealing. I am really looking forward to meeting the 20 subjects of this exhibition again and seeing their reactions to themselves as they take centre stage in Cork airport for the month of March. I would also like to thank the Celtic Ross Hotel for their support throughout the project and look forward to moving the portraits to this beautiful hotel at the end of the exhibition where they will hopefully raise money for a worthy cause." Neil Grant, General Manager, Celtic Ross Hotel said, "We are delighted to support Shay's exhibition and hopefully seeing some of the great reactions that visitors to Cork airport will have to some of West Cork's most characteristic faces. As this year marks the hotel's twentieth anniversary, this exhibition is our way of celebrating the wonderful people of West Cork and we look forward to bringing them where we will host a charitable auction and raise money for a worthy cause." Also speaking of the exhibition, Head of Communications at Cork Airport, Kevin Cullinane said, "We are proud to play host to this wonderful project which captures ordinary people, which, in itself is what makes the exhibition so extraordinary."