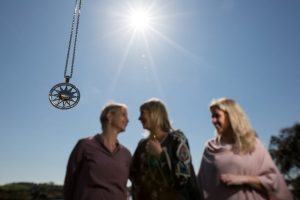 One of Ireland's leading contemporary jewellery brands Enibas has unveiled a special commemorative pendant for Colin Vearncombe (Black) fans around the world with all proceeds going to Cork based charity Brú Columbanus. Colin, an internationally loved singer, songwriter passed away in Cork University Hospital on January 26th last year after a car accident on route to Cork airport. Brú Columbanus provides home from home accommodation for family members of seriously ill patients in Cork hospitals and was where Colin's family stayed in the days after his tragic car accident in January 2016. The pendant which was designed by Sabine Lenz of Enibas in conjunction with Colin's wife Camilla and sons is inspired by a piece which Colin wore almost continually of a smiling sun. The Enibas piece carries the Irish inscription "Saol Iontach", a nod to Colin's international hit Wonderful Life. Just 500 limited edition sterling silver and 50 9ct Gold pieces will be made with orders expected from all over the world given Colin's large international fan base. Speaking of the launch of the pendant, Camilla Griehsel, Colin's wife said, "When Sabine first approached me with the idea of creating a commemorative piece  inspired by Colin’s pendant, I immediately said yes. I had the pendant made for Colin when we first met, so it held a particular significance for us and now also for our children. Sabine had wanted to create a piece of jewellery for charity for some time, and we’re thrilled that she chose to combine Colin’s pendant with Bru Columbanus for this purpose. At that extreme and difficult time it was invaluable for us to be together with family from near and far in the haven that is Bru Columbanus. For that and for the amazing love and support from our community we are eternally grateful ". Also speaking of the pendant which she designed, Sabine Lenz, Enibas said "We are so proud to work with Camilla on this very unique and special project. Camilla and her family have been through so much and yet they want to give back to the charity that helped them so much during those very dark days. Although the pendant is inspired by a piece that Colin himself wore as his good luck charm, we wanted to infuse some Irishness in to it as not only was Ireland and in particular West Cork loved by Colin but our own jewellery designs are known for their meaningful Gaelic inscriptions. What better way to acknowledge Colin's life and music than inscribing "Saol Iontach" on the piece as a reminder to those that wear it of how precious life is."   Anne-Maria O'Connor, Brú Columbanus said, "We are a small charity with a full time staff of just three and over 70 volunteers who give freely of their time to run the house and charity. Each day we have to turn people away as we are always full to capacity. This money will go towards our running costs which exceed €300,000 per annum." The Sterling Silver pendants which will be individually numbered will retail at €69 on leather and €75 on a chain while the 9ct Gold Pieces will retail at €198 on leather and €398 on a gold chain. They can be pre-ordered online at enibas.com from Monday May 1st and in-store from May 27th, one day after Colin's birthday.